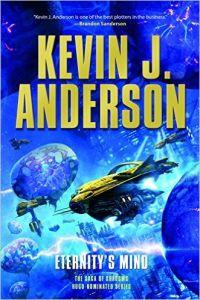 Eternity’s Mind is the climactic final book in Kevin J. Anderson’s Saga of Shadows Trilogy, which began with the Hugo nominee The Dark Between the. The Saga of Shadows, as well as its predecessor series, the international bestselling Saga of Seven, are among the grandest epic space operas published in this century.

Two decades after the devastating Elemental War, which nearly destroyed the cosmos, the new Confederation restored peace and profitable commerce among the peoples and worlds of the Spiral Arm. The ambitious, innovative Roamers went back to their traditional business of harvesting the vital stardrive fuel ekti from the clouds of gas giant planets, and the telepathic green priests of Theroc provided instantaneous galaxy-wide communication via their connection to the powerful and sentient worldtrees. The alien Ildiran Empire rebuilt their grand Prism Palace under the light of their seven suns, and their Mage-Imperator declared a new age of expansion and discover.
But peace was not to last. The malevolent Klikiss robots soon found an ally in the ancient and near-omnipotent Shana Rei, destructive creatures who are the personification of darkness and chaos … awakened after millennia of slumber to destroy all sentient life in the universe. The Confederation and the Ildiran Empire fought in every way possible, but the Spiral Arm itself seemed doomed.

All across the transportal network, space is tearing apart, the links between the gateways are breaking down, the fabric of space unraveling. The worldtrees are dying, entire planets are englobed in impenetrable black barriers erected by the Shana Rei, and the murderous taint has infiltrated the Ildiran race as well as Mage-Imperator Jora’h himself.

Desperate for stardrive fuel to power the military and all space travel, the industrialist Lee Iswander has been extracting ekti—the blood of the cosmos—from mysterious giant nodules found floating in empty space, draining these “bloaters” dry by the thousands. But in doing so, is he weakening the only ally that all of civilization may have against the Shana Rei?

A breathtakingly large canvas with a huge cast of characters, Eternity’s Mind is the grand finale of a story as complex as any Science Fiction epic you will ever read.

Sad to see the series end but it ran it's course and humans persevered
February 24, 2017
Rating
4.0
It is over! Do you ever feel sad that a great series has come to an end and there will be no more stories about the people you learned to care for, hate, or just not understand? That is my feeling after finishing Eternity's Mind which is the last book in The Sage of Shadows series by Kevin J. Anderson. And yes, I also read the other seven book series based on the same world and characters called The Saga of Seven Suns.

After ten books I have come to realize that the basic plot of each book is basically the same yet with different major villains. Villains isn't exactly the correct word since people end up teaming up with or fighting elemental forces that can be simply beyond comprehension. In other books the elemental forces have been water or fire elementals and in this book they are shadows that represent chaos and entropy. After seemingly hopeless catastrophic losses to these shadows and their robot lackeys the humans find new powerful allies in Eternity's mind.

I don't expect many readers to start with this last book in the series but you could if you wanted since there is an excellent synopsis at the beginning of each book. It will quickly become apparent that you have missed a lot however.

While the epic scope of the series and the sheer number of characters are impressive and entertaining I have come to realize it is the struggles and perseverance of the people that are most memorable. The Roamers show several examples  of their mental toughness just in this book alone. They lose businesses to disaster after disaster but always are willing to start all over and come up with ingenious ways to develop new products and amazing inventions.

But not everyone has the best intentions. Some develop cures with no intention of ever sharing them while others blindly exploit natural resources with no desire to understand the impact on the universe. I would be blind if I didn't see the parallels to our own struggles to take risks while grow our personal wealth and knowledge versus the potential harm these risks can create for the planet and others.

While I will miss the series and enjoyed the successes and struggles of the characters the basic storyline of humans fighting elemental forces has run its course in my mind. Good luck to you all and thank-you for the series. I give this last book four out of five stars. Those that like epic SciFi with great characters that show perseverance against all odds should check it out or the earlier Saga of Seven Suns series where it all started.
F
Fwwadmin #1 Reviewer 122 reviews
Report this review Comments (0) | Was this review helpful to you? 0 0

Books of the Month